A WEST Cork  rowing club has linked up with a local charity to raise awareness of mental health.

Kilmacabea Rowing Club has joined up with Lisheens House – a suicide prevention charity based in Skibbereen – with an innovative idea that will see Lisheens House name, number and logo displayed on the club’s vests. 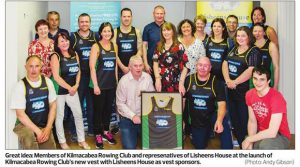 The rowing club competes in several local regattas and began the coastal rowing season with two wins – in veteran ladies and senior ladies – at the Glandore regatta last Sunday.

Speaking about the link-up with Lisheens House, Carmel McCarthy of Kilmacabea Rowing Club explained how the idea originated.

‘Most clubs would have a sponsor on their jersey but we were buying a new set of oars this year and we were trying to get a sponsor for them, so we looked at our options for getting new jerseys this year,’ she said.

‘I had an idea of offering the space for free on the jersey to a local charity to advertise what they do. It’s not an original idea; Barcelona did something similar with UNICEF before.

‘Lisheens House is local and it does great work, too, and everyone agreed so we went with that.’

Carmel added: ‘Mental health is important to us all and if this helps raise awareness that’s fantastic.

‘One of the things we can all do to help our mental health is be involved in physical activity and rowing is a sociable activity as well that gets you out meeting people.’

Mick Kearns of Lisheens House is delighted with the link-up between the charity and Kilmacabea Rowing Club and the chance to promote awareness of mental health.

‘It’s great that it gets the name of Lisheens House out there and the help line number is on the jersey,’ he said.

‘The next stage for us is the training and education of mental health and we are keen to get out there and give talks and provide QPR training, and the counselling is there as well.’

QPR training consists of steps that anyone can learn to help prevent suicide – and to Question, Persuade and Refer someone who may be suicidal.

Lisheens House is compiling a database of West Cork clubs and hopes to touch base with clubs to make them aware of the services the charity provides as well as what it can offer.